Last Friday morning, Patrick drove up to our house to help me build a window well cover for the guest room's egress window.  As per usual, Patrick did most of the work while I was the "go-fer" and holder.  We did the cutting and construction for the frame in the garage as it was a drizzly, wet day.  It fit nicely.  ;) 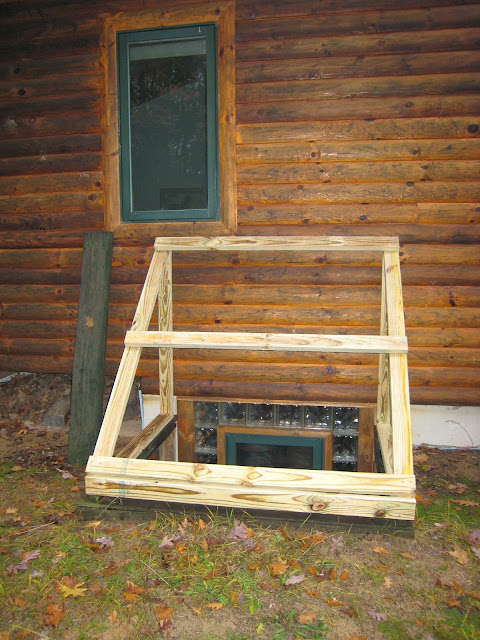 The 3 pieces of polycarbonate clear roof sheeting were cut as one piece which gave the circular saw a firmer surface to slide along and also made sure they were all the same length.  :)

Here we are getting ready to attach the 1st pice of polycarbonate roofing. 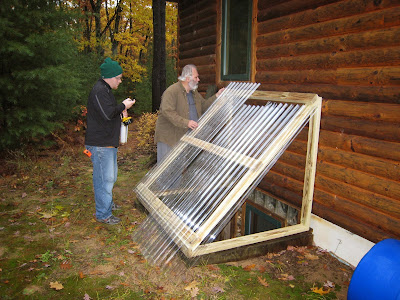 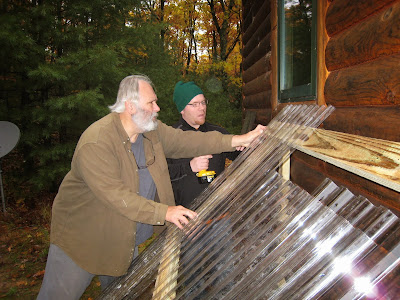 Once the sheets were held in place by a few screws, Patrick went back and added a screw to each "low spot" in the sheeting surface.  We went with the low spots to give it a stronger bond on the 3 cross boards.  I had bought brackets that were "supposed" to fit underneath the sheeting, but the "waves" on them did not fit the "waves" in the polycarbonate sheeting.  Since the angle of this cover is quite steep for shedding snow, we figured it wasn't a big deal to attach the sheeting without full back support……"hopefully", that holds true.  We did use the screws with a rubber washer under the head which will help keep the screw holes from leaking, although even leaks wouldn't be a problem in this situation.  As you can see from Patrick's outerwear, the drizzling had gotten a bit heavier. 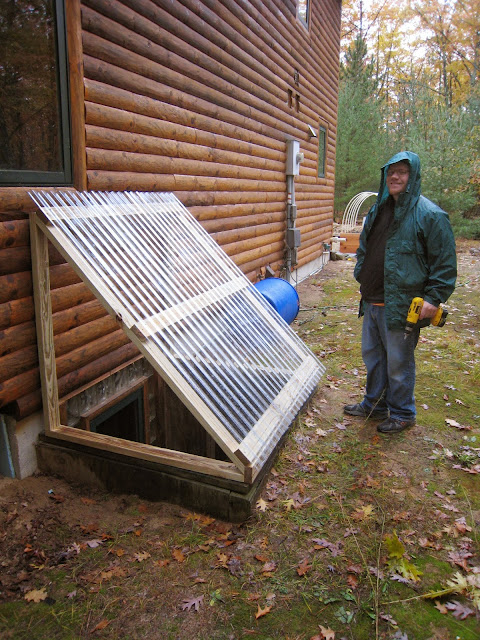 The cover is being secured to the window well frame.  Notice the new horizontal boards attached to the side wall?  Patrick used our left over pieces for ladder rungs on both sides of the window well.  The lowest rung will get trimmed to match the upper 2 the next time Patrick comes up to our house………...providing he remembers to bring along his reciprocating saw.  ;) 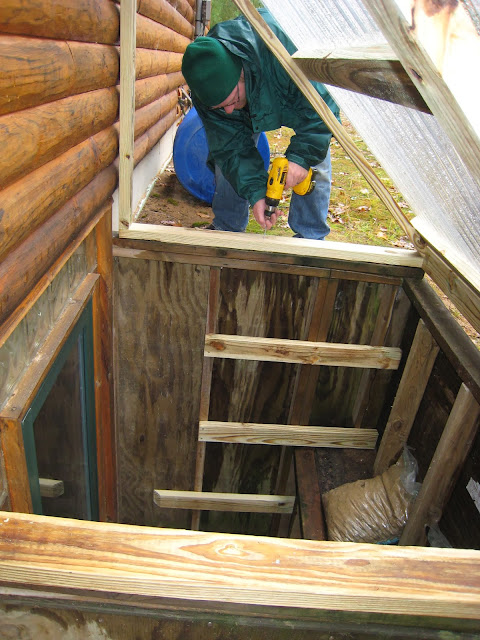 The "almost" finished window well cover.  Now comes my big part in the job.  :)  I want to cut a tarp to fit the open sides of the window well cover, attaching them to the covers frame with Velcro strips.  Our thought is they would be left on all Fall and Winter to help keep blowing leaves and snow from inside the window well, then be removed in the Spring and Summer to allow for more daylight, plus allow for more freely flowing fresh air to come in when the guest room window was open. 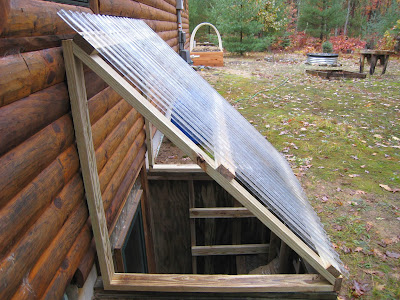 Don's job was to spread the 8 bags of river rock we'd bought for the bottom and mid level dirt surfaces in the window well. 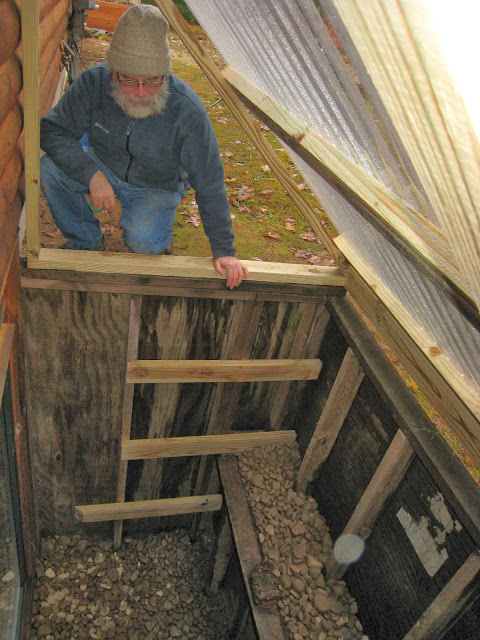 Nice, eh?  ;)  We were surprised that each bag of river rock had water in them even though they were completely sealed bags.  The individual rock colors showed when we bought them but after handling, the water became muddy and that is what you see in the photo below………muddy water dried to a dull brown.  Next Spring (perhaps even this Fall), we will take a hose and spray them down so that their various "true colors" show.  ;) 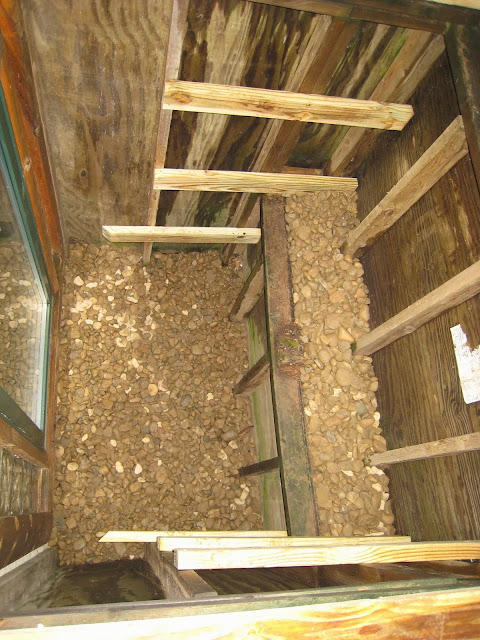 Posted by MadCityMike at 7:19 AM

How well did your egress window well cover hold up? Why did you chose the wavy polycarbonate sheeting? I need to make one of these and really appreciate this post!

It still looks brand new! We had record amounts of snow this last Winter, too, but no problems whatsoever. I think I wrote a later post on the side coverings I cut and sewed, attaching them using Velcro sewn Along e edges of the tarps and the other sticky half stapled onto the wood frame, so that we could keep out the blowing leaves of Fall and the snow during the Winter. For the Summer, we just took them off and will reattach them before the leaves start falling. :)

What is the advantage to using the wavy polycarbonate vs. something flat? Thank you!

It is what I had in mind (with no specific reason) and was available locally. I don't know if there is any advantage or not, but we're pleased with it and it held up wonderfully in really harsh Winter conditions.

Great! Looks like I have a new weekend project ahead of me. I appreciate your help!

So, how does kid egress in case of a fire?
Do you have a photo of it "open" and how heavy is it?

Egress Window Wells are great to use when space is limited and it also maximizes the use of daylight too.
http://www.thebasementguyscleveland.com/services/egress

Such a great articles in my carrier, It's wonderful commands like easiest understand words of knowledge in information's.
Poly Carbonate Roofing in Chennai

I am very thankful for this article. You describe window well installation in simple way which help us lot. This content improves the window wells design and security.

The polycarbonate sheeting is much less expensive than say a sheet of flat plexiglass. I could do 2-3 window wells with a $30 sheet of the poly, where as 1 window well in plexiglass will cost me $90.

Does your window well cover open/hinge and lift up? Or are you considering the side openings large enough for egress? I need to build 2 of these but I suspect because of the angles I have to use, my side openings won't meet egress so I'll have to hinge mine.